We are happy to announce the release of our new Global Gaming Deals Activity Report for Q1-Q3’21. If you enjoy the reading, please, be sure to subscribe to our Patreon. 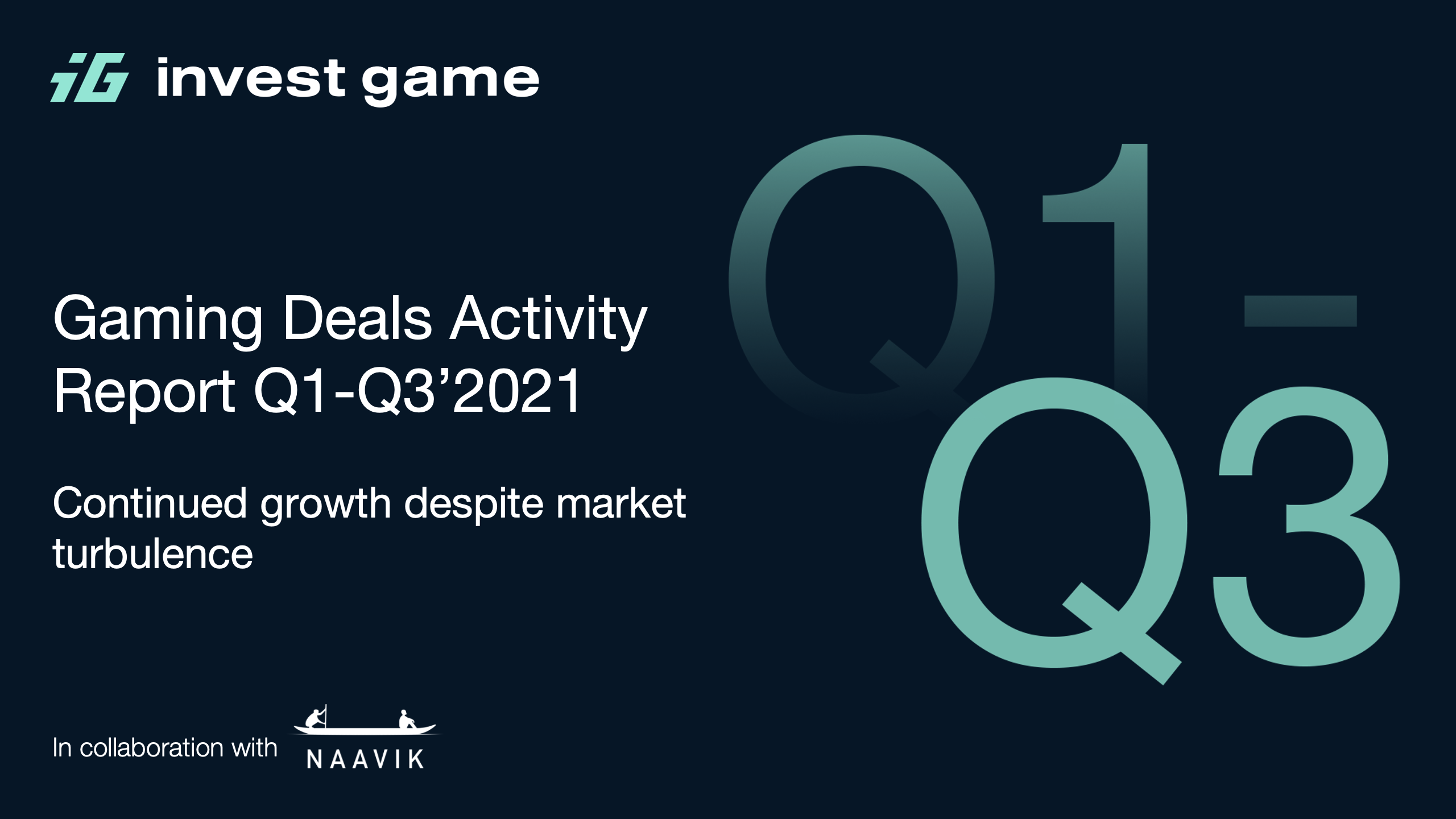 — 224 M&As provided for nearly half (48%) of the closed deal value. Public offerings saw 59 transactions, accounting for around 37% of the total value. Private investments contributed 15% with 384 closed deals

US-based software giant Unity has announced its intent to acquire a New Zealand-based visual effects company co-founded by Peter Jackson Weta Digital for $1.625B. With the acquisition, Unity gets access to all VFX tools developed by the company, and a team of VFX artists and engineers. Moreover, Unity will also get access to the massive catalog of developed digital assets, intellectual properties, and core pipelines owned by Weta.

US-based Forte, which provides game developers with blockchain infrastructure, has closed a $725m Series B round, led by Sea Capital and Kora Management. This is the largest blockchain-gaming deal we observed this year — previously, this was a $680m round of Sorare, closed in Sep’21.

Australia-based modding gaming platform Mod.io has raised $26m in Series A funding. The round was led by Tencent, with participation from Lego Ventures, and returning investors Makers Fund, Play Ventures, and others. The funding will help the company to increase the number of developers and to implement mods and user-generated content across multiple platforms.

UK-based startup providing ‘Non-Intrusive’ audio ads within mobile games AudioMob has raised $14m in a Series A funding round led by Makers Fund and Lightspeed Venture Partners, with the participation of Sequoia Scout Program and Google. The new funds will be used to expand the company team in new locations and to create more products to enhance their audio technologies and other major components in vital departments.

US-based provider of AI solutions for the play-to-earn games rct AI has raised $10m in a Series A-3 funding. The round was led by Yuanyuzhou Ventures and Springwind Ventures with participation from Galaxy Interactive, Bonfire Union, Everest Ventures Group, and others. The funding will be used for further expansion and entering new areas like NFT.

US and Hong Kong-based VR startup Sandbox VR has raised $37 million in a Series B led by Andreessen Horowitz through its Growth Fund, which serves new companies at an inflection point, with the participation of Alibaba and Craft. The company will use funds to open 10 new retail locations across the globe, including Paramus, London, and Toronto in 2022, as well as two corporate and two franchise locations.

Canada-based online gaming service company Edgegap has raised $7m in Series A funding. The round was led by Konvoy Ventures with the participation of GFR Fund, Liberty Global, and Akamai. The investment will be used to expand the team and to provide additional online support services to game studios.

US-based startup Neon has raised $10.5m to create its blockchain-powered first-person shooter Shrapnel. The round was led by Griffin Gaming Partners, with the participation of Polychain Capital, Forte, and others. Forte will also provide additional technical support to the Company.

Turkey-based mobile games developer Hadi has raised $5.2m in Seed funding. The round was led by Griffin Gaming Partners with participation from other angel investors. The funding will be used for the further development of several unannounced titles and expanding the current team.