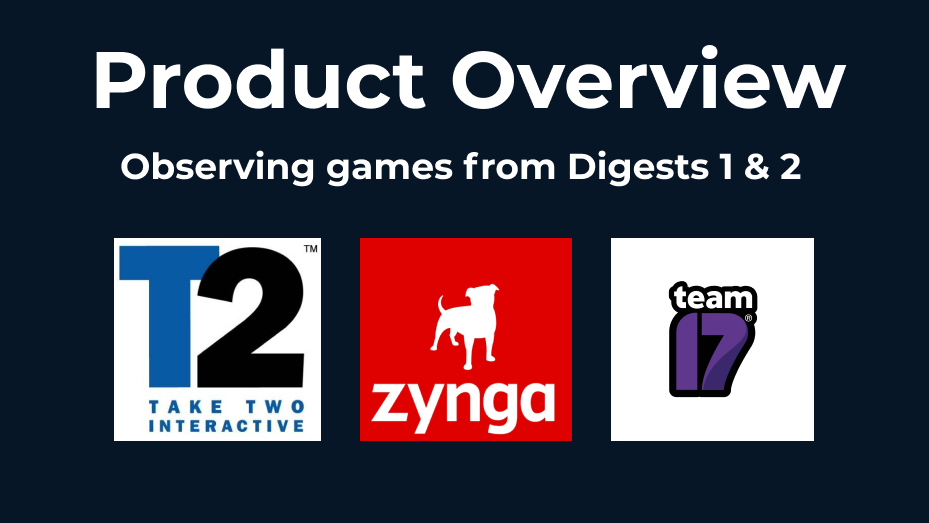 Last Weekly Digest has brought us 2 big investment activities from the US, and UK. 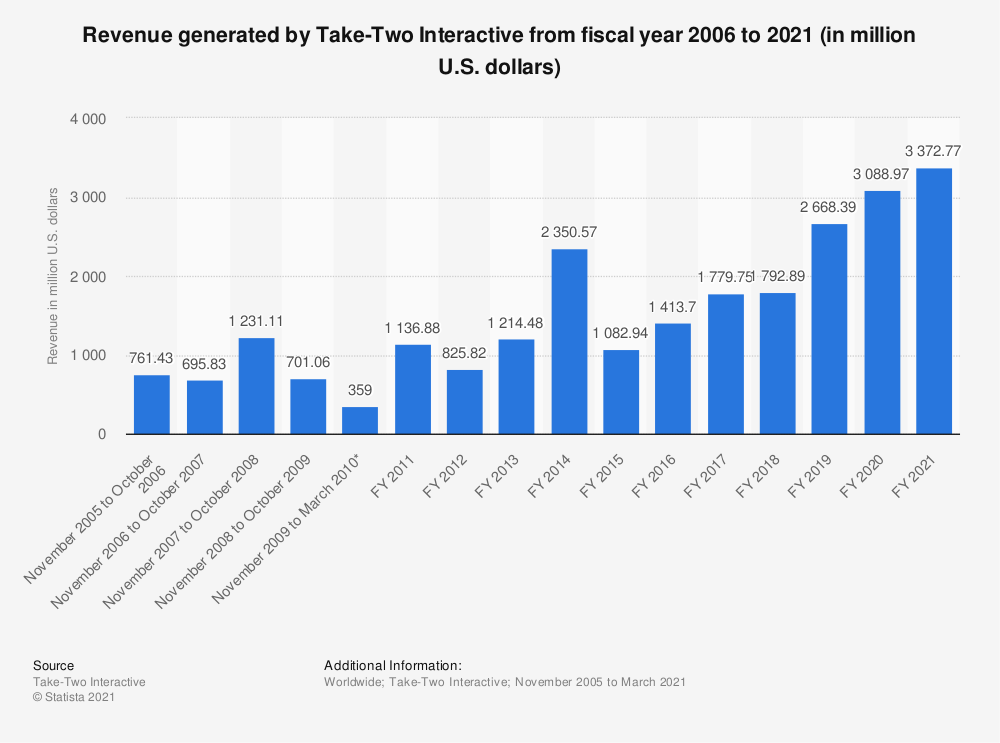 NBA 2K is a basketball simulator based on the players from the National Basketball Association.
— Core gameplay is third-person role-playing simulator where players can choose one of the 5 players in their team. Also, they can play in additional game modes such as 3×3 (street basketball), or contests (slam-dunk, 3 point-challenges).
— Meta gameplay is a card-based RPG with a marketplace, where collect players (cards), create a team (cards deck), improve players’ skills (upgrade cards), and exchange cards with another player (cards marketplace).
— Monetization is based on a paid model where the original price is $49.99 for PC, and $79.99 for Consoles. Also, players can buy bundles with historic players and boosters included from the start of the game for which they pay x2 to the basic price.

GTA Online — is an online multiplayer version of GTA 5 game. It is an action-adventure game in the US streets setting.
— Core gameplay is third-person action where players complete missions in the general narrative using one of the three main characters (driver, shooter-assassin, and shooter-sniper). They can also freely not go on missions and travel through the open world using different vehicles.
— Meta gameplay is an open-world simulation where players can connect with other players, and buy houses, destroy cities, fight with the police or special forces.
— Monetization is based on a paid model where the original price is $29.99 for PC, and $49.99 for Consoles. Also, players can buy bundles with in-game currency and character packs.

UK-based PC game publisher Team17 ($83M total revenue in 2020) has been known for a few popular PC franchises such as Worms, Escapists, Overcooked!

At the moment, their main revenue drivers are Hell Let Loose, and Overcooked! 2.

Hell Let Loose (>$29.6M total revenue since December 2013) –
— Core gameplay is a first-person co-operative shooter 50×50 in the World World 2 setting. Each side consists of 6-units squads with a unit leader and the personal voice channel. Players can choose from two game modes: Warfare (control more map zones to win), or Offensive (capture all zones from defending team to win).
— Meta gameplay is a strategy-based map where players can see all zones, enemy movement, and allies’ plans.
— Monetization is based on a paid model where the original price is $39.99. 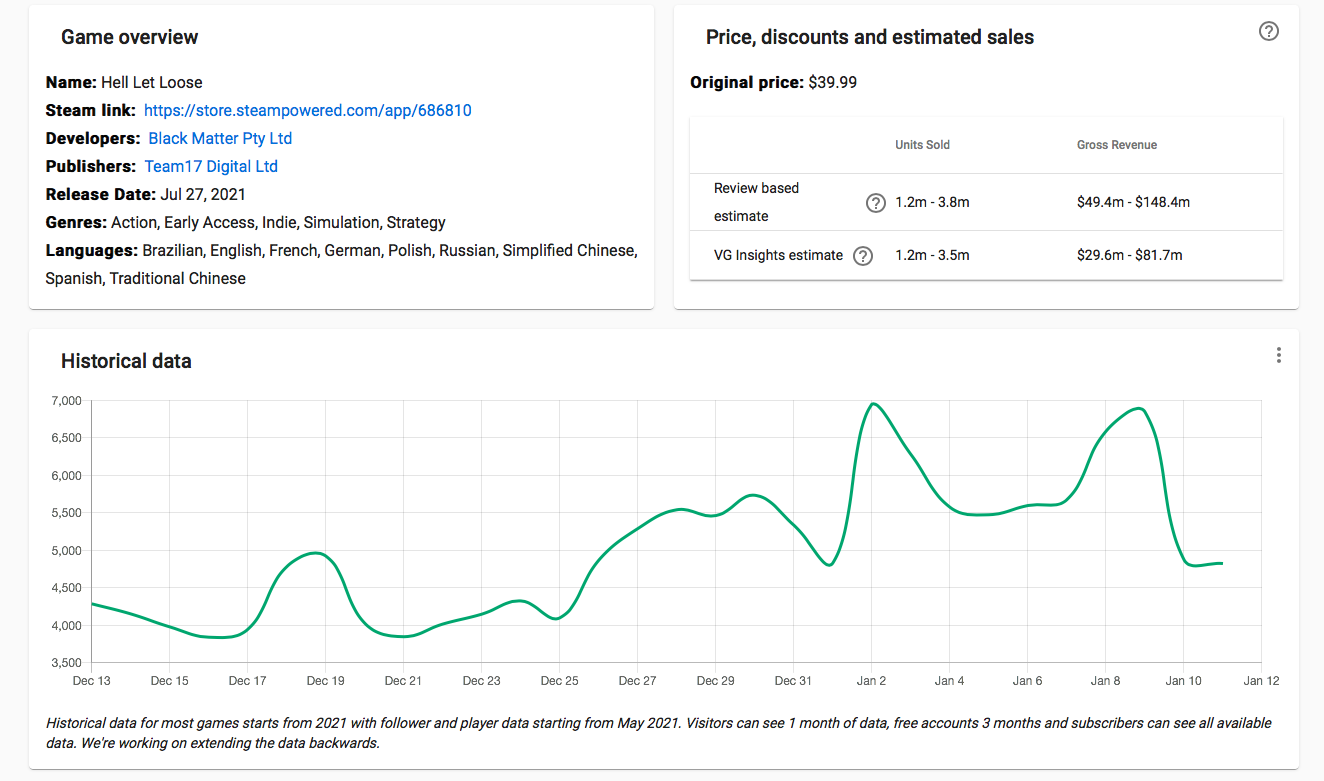 Overcooked! 2 (>$13.2M total revenue since December 2013)
— Core gameplay is a top-down cooking simulator in a cartoon setting. Players can play single-player to serve orders or play online co-op with up to 4 chefs.
— Meta gameplay is collecting chef characters, recipes, and new restaurants.
— Monetization is based on a paid model where the original price is $24.99. 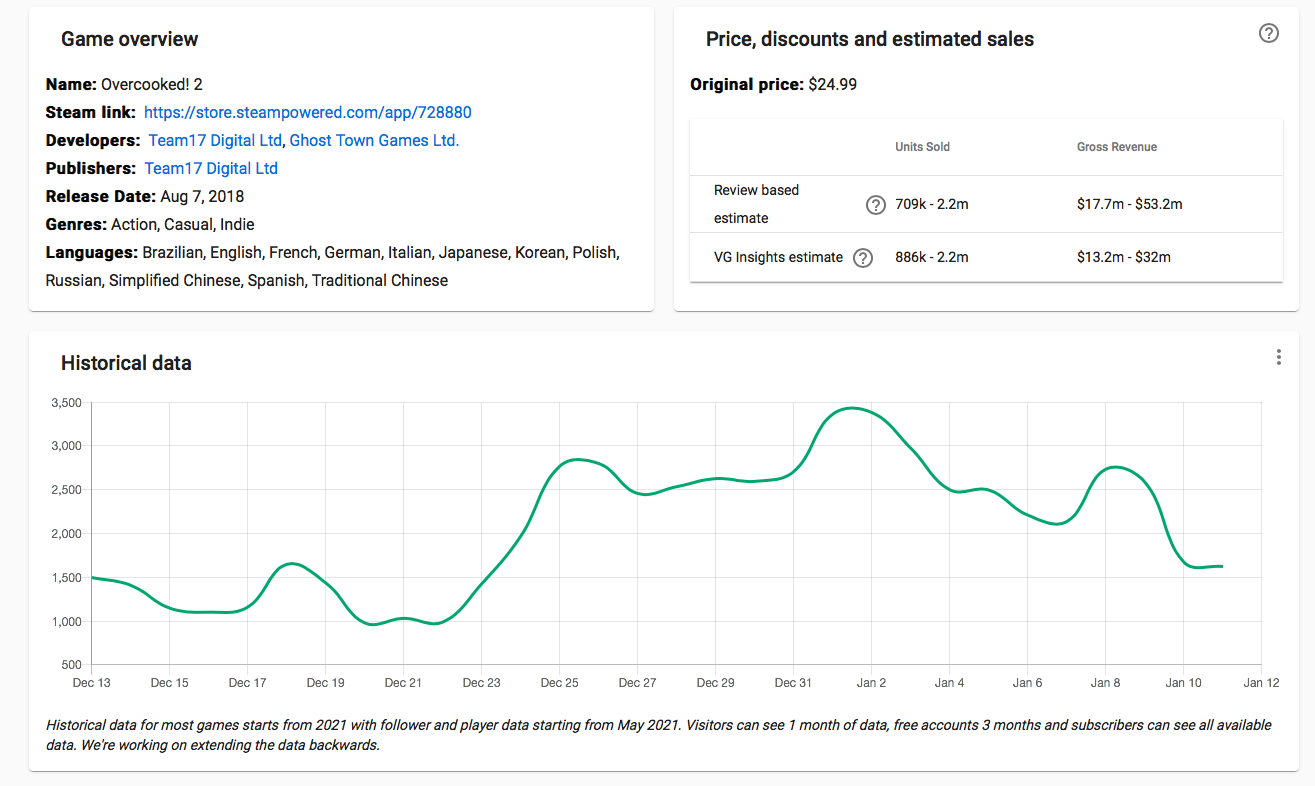 US-based social and mobile game publisher Zynga ($1.79B revenue in 2020) has been known for their Farmville series, Zynga Slots & Poker series, and a few big acquisitions during the 2020-2021.

We wrote about Rollic, and Peak acquisitions in the past. But overall, we can highlight 4 business units that are publishing mobile games on behalf of Zynga Holding: Rollic, Peak, Small Giant Games, and Zynga itself.

With that being said, we can highlight main revenue drivers across all publishing wings and make an into about every game.

Toon Blast (Peak) — a casual match-2 puzzle.
— Core gameplay is a block breaker (match-2) puzzle in a cartoon animal setting. Players should break all the necessary blocks before their move out.— Monetization is moves-based as players can buy additional moves to complete the current level.

Empires & Puzzles (Small Giant Games) — a core match-3 puzzle battler.
— Core gameplay is a match-3 puzzle where players should match 3 similar tiles (red) so the chosen character (red) could attack the enemy. Players should kill all the enemies before their last character dies. Players get resources ‘food’ and ‘iron’ when they win the level.
— Meta gameplay is a castle builder where players recruit new characters and boosters using food and iron resources. Players also can upgrade their characters (cards) for them to deal more damage.
— Monetization is cards-, and resources-based as players can buy cards to upgrade their characters, or resources to use buffs in the battle. One per day players can take some resources by watching rewarded videos ads.

Zynga Poker (Zynga) — a casual social poker.
— Core gameplay is Texas holdem poker in 5-players, or 9-player tables.
The game is divided into matches where players get points for longest railways and completed rides.
— Meta gameplay is a 3-lines casino slot for players to get additional chips to bet in games.
— Monetization is energy-based as players can buy chips to bet in games.

Harry Potter: Puzzles & Secrets (Zynga) — a casual match-3 puzzle.
— Core gameplay is a match-3 puzzle where players should match 3 similar tiles for them to vanish. Each level gives the player a goal to vanish a specific amount of tiles.
— Meta gameplay is collecting skills to use when solving puzzles. Different skills can help to vanish the tile in a different way (line, square, direct target, etc).
— Monetization is moves-based as players can buy additional moves to complete the current level.

Hair Challenge (Rollic) — a hyper-casual runner.
— Core gameplay is arcade runner with scrolling mechanics where players move to raise a long hair and avoid obstacles that cut hairs off.
— Meta gameplay is character customization. Players use reward coins to buy custom objects by winning levels.
— Monetization is energy-based on interstitial ads between levels. 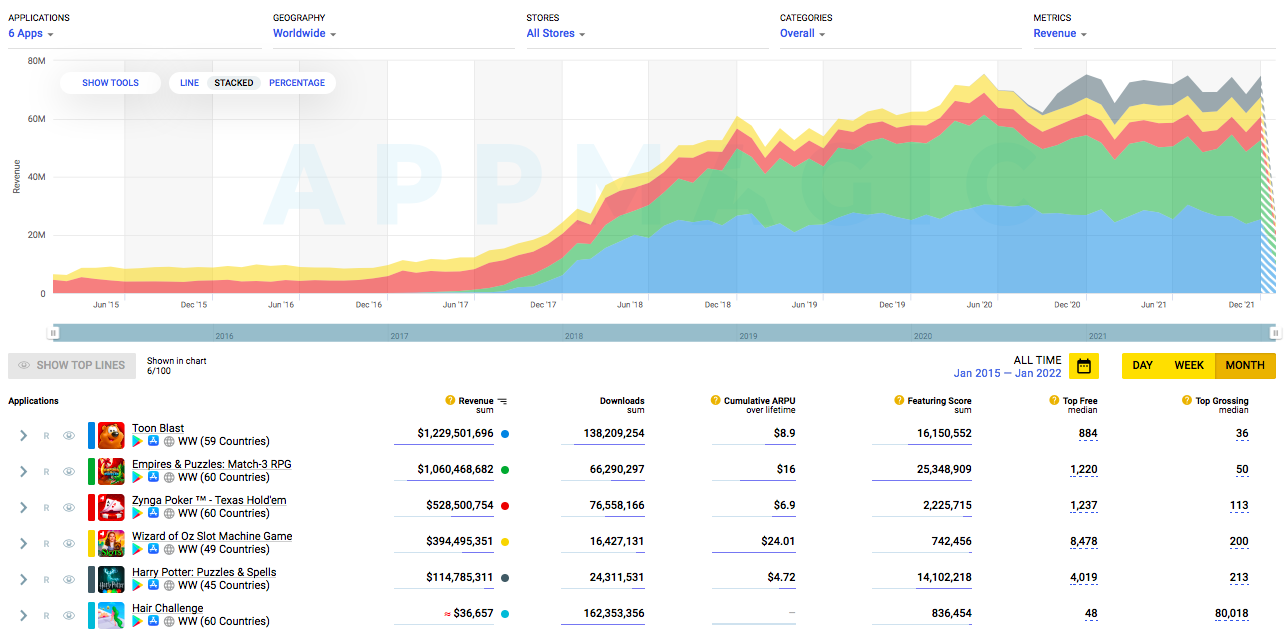