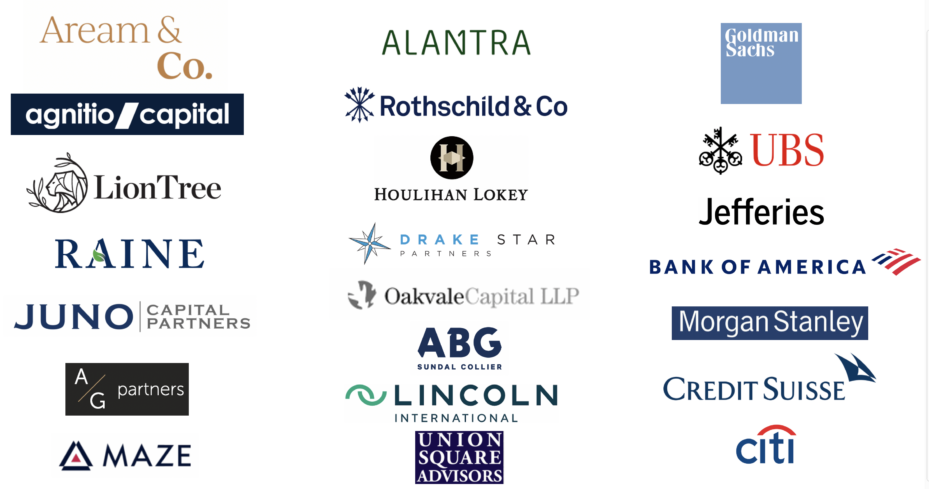 InvestGame prepared a global league table of the most active sell-side M&A advisors in the gaming industry. The analysis is based on InvestGame proprietary database of transactions closed during Jan 2020 – Apr 2021. The table includes 41 acquisitions (sale of controlling stake) with the following criteria:

Note: we’ve updated the ranking table based on the recent feedback received from the sell-side gaming advisors

Aream & Co. is ranked the #1 sell-side M&A advisor in the gaming industry worldwide with 12 closed gaming deals and over $6B in disclosed deal value during the Jan 2020 – Apr 2021 period. Aream & Co. is an investment banking firm headquartered in London, United Kingdom. The bank was founded by Affan Butt and Kartik Prabhakara. Most notable clients include King, Playtika, Peak Games, GoodGame Studios, Storm8, Jagex, Small Giant Games, and Easybrain.

Just today, the bank exclusively advised Game Labs on its sale to Stillfront.

The 2nd place is held by Agnitio Capital with 4 closed deals and above $0.5B value. Agnitio Capital is an investment bank founded in 2003, based in London, United Kingdom. The bank is led by Shum Singh. Most notable transactions include DECA, Candywriter, A Thinking Ape, and Innova.

The 3rd place is held by a boutique investment banking firm, LionTree. LionTree was founded in 2012 by Aryeh Bourkoff and headquartered in New York, USA.  The company serves companies in TMT space providing services for M&As, capital raising, and IPOs. In fact, LionTree is one of the leading advisors in gaming SPACs, having advised Skillz, PLAYSTUDIOS, and Kismet Acquisition One Corp. (merger with Nexters Global).

Goldman Sachs has taken 4th place among all M&A gaming advisors and 1st place among wall street’s banks. There are multiple advisors who closed 2 gaming transactions during Jan 2020 – Apr 2021, but Goldman Sachs has advised on the largest deals including $2.1B sale of Glu Mobile (non-exclusive financial advisor) and $7.5B ZeniMax Media sale (exclusive advisor).

If you want to learn more about the deals we used to create the ranking above, you can find an extended version of the table in our Patreon feed. There, we regularly post some exclusive content for our Patrons, so feel free to subscribe. We would really appreciate your support!