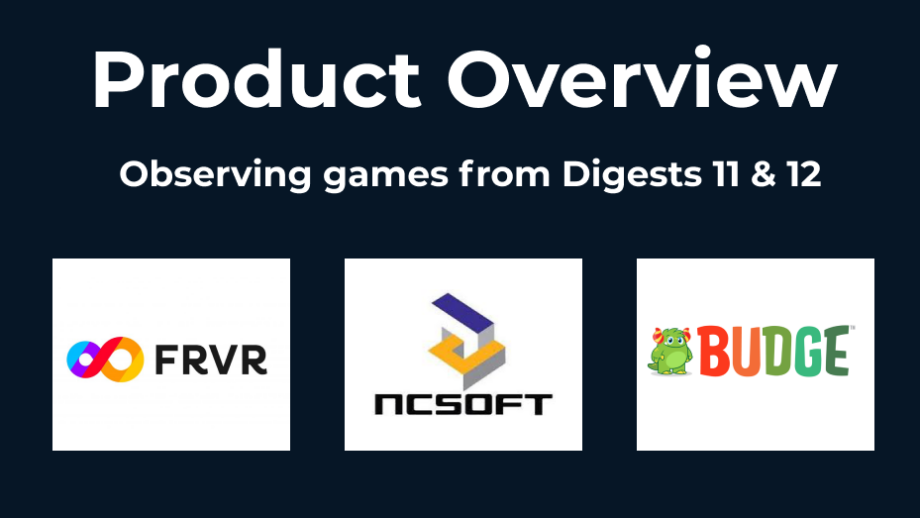 11th and 12 Weekly Digests have brought us new investments from South Korea and Portugal, as well as M&A deals from Canada.

South Korean gaming holding NCSOFT (>$1.9B total sales in 2021) has been known mainly for a popular Lineage franchise. This franchise includes a series of core MMORPG games with most of the paying audience coming from South Korea, Japan and Taiwan.

The main revenue drivers in 2021 were three games:

All these games has the same gameplay and monetization model:

— Core gameplay is a third-person action RPG in an open game world where players complete quests and fight different monsters. It allows players to increase their character’s level, and buy new equipment.
— Meta gameplay is the mass PvP battles between groups of players (clans).
— Monetization is based on in-app currency which players need to buy/upgrade rare weapons and armor. Also, this currency is used to buy a pet.

The main difference of a new game Lineage W is that it connects different countries (=servers) to bring more players into the open world. Of course, the quality of art and technology are also much higher in the new game version.

Portugal-based FRVR (1.5B visitors since 2014) is a HTML5 instant gaming platform with 44% of the audience coming from the US, Germany, and France.

~9M players per month launch games instantly from their PC/Mobile devices using the internet browser. Inside, they can choose from thousands of casual puzzles/board games, as well as arcades and sports games.

All games in FRVR have the same monetization model – in-game currency and in-game ads.

Players can buy currency to get more moves, or new skins. Also, players can get in-game boosters by watching video ads.

Canada-based Budge Studios ($>122M total revenue and >1.2B downloads since 2014) – mobile kids game developer with more than 50% of the audience coming from Brazil, India, Mexico and other emerging markets.

Their main monetization model is In-App Ads like in most kids games.

At the same time, their main In-App Purchases monetization steam is Subscriptions from the US players.

In most cases players will get character skins, dress and house customizations like in the game ​​Barbie Dreamhouse Adventures (>28M total revenue since July 2018) – casual barbie simulator with tamagotchi mechanics.